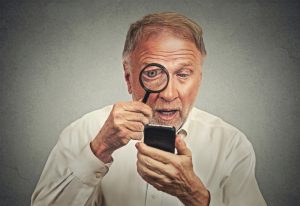 Cataracts are responsible for 51% of world blindness, representing about 20 million people (World Health Organization [WHO], 2010). More than 90% of cataracts are age-related. Cataracts are so common in older adults that some almost consider them an inevitable consequence of old age and often fail to report to the doctor. According to the University of Washington, Department of Ophthalmology (2008), 400,000 new cases of cataracts are diagnosed each year, over 3 million visits to a doctor are related to cataracts each year, and 5,500,000 people have some impaired vision due to cataracts. Although about half of people between 65 and 75 years of age have cataracts, they are most common in those over age 75 (70%), and there are no ethnic or gender variations (Trudo & Stark, 1998).

Advancing age is the biggest risk factor for the development of cataracts. Other risk factors include diabetes, tumor, long-term use of medications such as corticosteroids, excessive exposure to sunlight, blunt or penetrating trauma, and excessive exposure to heat or radiation. Tobacco use, family history of cataracts, high alcohol intake, diabetes, and lack of dietary antioxidants also puts the person at risk for cataract development (Gerzevitz, Porter, & Dunphy, 2011).

Cataracts cause no pain or discomfort and may be manifested by gradual opacity of the lens, which affects the ability to see clearly. This causes decreased visual acuity, sensitivity to glare, and altered color perception. Older adults may not be aware of the problem until visual changes occur. They may report blurred or distorted vision or complain of glare when driving at night. The person may present with a fall due to visual changes. Some older adults will disclose that their reading vision has improved and they no longer need reading glasses, something called “second sight”. Eventually the pupil changes color to a cloudy white. Generally, the most common objective finding is decreased visual acuity, such as that measured with a Snellen eye chart. The patient should be referred to an ophthalmologist for further evaluation and consideration of surgery.

Although changes in eyeglasses are the first option, when quality of life becomes affected, the most effective treatment for cataracts is surgery. Surgery is relatively safe and usually is done as an outpatient procedure. The opaque lens is removed through an incision in the eye and an intraocular lens is inserted. The surgical incision is either closed with sutures or can heal itself. This is the most common operation among older adults, and more than 95% of them have better vision after surgery (Trudo & Stark, 1998). After surgery, patients will need to avoid bright sunlight; wear wrap-around sunglasses for a short time; and avoid straining, lifting, or bending. They may need to use eye drops as instructed by the doctor (National Eye Institute, 2013). The benefits of surgery include improved visual acuity, depth perception, and peripheral vision, leading to better outcomes related to ADLs, quality of life, and reduced risk of falls. Complications associated with surgery are rare but include retinal detachment, infection, and macular edema. Cataract surgery today offers a safe and effective treatment to maintain independence and improve quality of life for older adults.