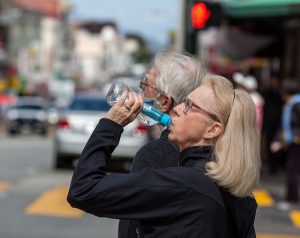 Although gastroesophageal reflux disease (GERD) is common among older adults, the true prevalence is not known. Many patients with GERD-related symptoms never discuss their problems with their primary care provider. GERD is thought to occur in 5–7% of the world’s population, with 21 million Americans affected (International Foundations for Functional Gastrointestinal Disorders, 2008). It is found in both men and women.

Pathophysiological changes that occur in the esophagus, hiatal hernia, and certain medications and foods increase the risk for GERD. Obesity (Corely , Kubo, Levin et al., 2007) and activities that increase intra-abdominal pressure such as wearing tight clothes, bending over, or heavy lifting have also been linked to GERD (MedlinePlus, 2005a). The cardinal symptom of GERD is heartburn; however, older adults may not report this, but rather complain of other symptoms such as pulmonary conditions (bronchial asthma, chronic cough, or chronic bronchitis), a hoarse voice, pain when swallowing foods, chronic laryngitis, or non-cardiac chest pain (Pilotto & Franceschi, 2009). The chronic backflow of acid into the esophagus can lead to abnormal cell development (Barrett esophagus) that increases the risk for esophageal cancer.

Older adults often have atypical symptoms, making the diagnosis of GERD very challenging. As people age, the severity of heartburn can diminish, while the complications, such as erosive esophagitis, become more frequent. Therefore, endoscopy should be considered as one of the initial diagnostic tests in older adults who are suspected of having GERD (Pilotto & Franceschi, 2009). Examination of the esophagus, stomach, and duodenum through a fiber-optic scope (endoscopy) while the person receives conscious sedation, allows the gastroenterologist to visualize the entire area, identify suspicious areas, and obtain biopsies as needed. Helicobacter pylori (H. pylori), a chronic bacterial infection in humans, is a common cause of GERD, affecting about 30% to 40% of the U.S. population. Testing for H. pylori can be done during the endoscopy or by other tests (Ferri, 2011).

The objectives of treatment for GERD include: (1) relief of symptoms, (2) healing of esophagitis, (3) prevention of further occurrences, and (4) prevention of complications (Pilotto & Francheschi, 2009). Lifestyle and dietary modifications are important aspects of care. It is widely recommended that persons with GERD should stop smoking, limit or avoid alcohol, and limit chocolate, coffee, and fatty or citrus foods. Medications should be reviewed and offending medications modified, since certain medications decrease the lower esophageal sphincter (LES) tone, allowing acid to backflow into the esophagus. These include anticholinergic drugs, some hormones, calcium channel blockers, and theophylline. Avoidance of food or beverages 3–-4 hours prior to bedtime, weight loss, and elevation of the head of the bed on 6-to-8 inch blocks are some other interventions that may help alleviate symptoms. Pharmacological treatments with antacids in conjunction with histamine 2 (H2) -blockers (Tagmet, Zantac, Axid, and Pepcid) are used for mild GERD. If these are ineffective in controlling symptoms, then the proton pump inhibitors (PPIs) are the next drugs of choice. These include medications like Nexium and Dexilant. With lifestyle modifications and appropriate medications, older adults can manage their GERD symptoms so that quality of life is maintained.