COPD Chronic obstructive pulmonary disease (COPD) refers to a group of diseases resulting in airflow obstruction due to smoking, environmental exposures, and genetics. However, smoking is clearly the most common cause of COPD. The two disorders most commonly included under the umbrella of COPD are emphysema and chronic bronchitis. Although the disease mechanisms contributing to airflow obstruction is different in these two disorders, most patients demonstrate features of both emphysema and chronic bronchitis. 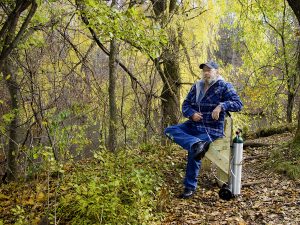 In 2008, the CDC recently released a report naming COPD as the third leading cause of death in the United States (National Vital Statistics Reports [NVVS], 2010). There are more than 12 million people in the United States U.S. diagnosed with COPD. However, due to the under diagnosis of the disease, only estimations of the prevalence of COPD are available, which suggest that approximately 24 million people are living with COPD (ALA, 2012). Slightly more females than males are affected, with female smokers having a 13 times greater chance of death from COPD than nonsmoking females (ALA, 2004).

Chronic bronchitis is a common COPD among older adults. It results from recurrent inflammation and mucus production in the bronchial tubes. Repeated infections produce blockage from mucus and eventual scarring that restricts airflow. The American Lung Association (2012) stated that about 8.5 million Americans had been diagnosed with chronic bronchitis as of 2005. Females are twice as likely as males to have this problem.

Emphysema results when the alveoli in the lungs are irreversibly destroyed. As the lungs lose elasticity, air becomes trapped in the alveolar sacs, resulting in carbon dioxide retention and impaired gas exchange. More males than females are affected with emphysema, and most (91%) of the 3.8 million Americans with this disease are over the age of 45 (ALA, 2004).

The major risk factor for COPD is smoking, which causes 80–90% of COPD deaths. Alpha-1-antitrypsin deficiency is a rare cause of COPD, but can be ruled out through blood tests. Although “COPD is almost 100% preventable by avoidance of smoking” (Kennedy-Malone et al., 2003), environmental factors play a strong role in the incidence of COPD. Approximately 19.2% of people with COPD can link the cause to work exposure, and 31.7% have never smoked (ALA, 2008).
Warning Signs

Persons with COPD often experience a decrease in quality of life as the disease progresses. The shortness of breath so characteristic of these diseases impairs the ability to work and do usual activities. According to a survey by the American Lung Association, “half of all COPD patients (51%) say their condition limits their ability to work [and] . . .” and “. . . limits them in normal physical exertion (70%), household chores (56%), social activities (53%), sleeping (50%), and family activities (46%)” (2004, p. 3). Diagnosis is made through pulmonary function and other tests, and a thorough history and physical.

Although there are no easy cures for COPD, older adults can take several measures to improve their quality of life by controlling symptoms and minimizing complications. These include lifestyle modifications such as smoking cessation, medications (see below), oxygen therapy, and pulmonary rehabilitation. Older adults should have influenza and pneumonia vaccinations (National Heart Lung and Blood Institute, [NHLBI], 2010). Oxygen therapy may be required for some people.

Medications are used to help control symptoms, but they do not change the downward trajectory of COPD that occurs over time as lung function worsens. Typical medications given regularly include bronchodilators through oral or inhaled routes. Antibiotics may be given to fight infections and systemic steroids for acute exacerbations.

In extreme cases, lung transplantation may be indicated. Older persons with severely impaired lung function related to emphysema may be at higher risk of death from these procedures and have poorer outcomes.
Reducing factors that contribute to symptoms, use of medication usages, alternating rest and activity, energy conservation, stress management, relaxation, and the role of supplemental oxygen should all be addressed. Many older adults with COPD find it helpful to join a support group for those who are living with similar problems.