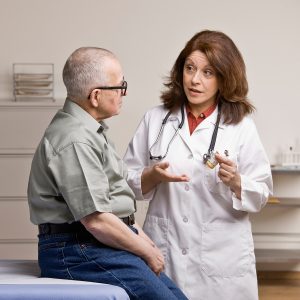 Older adults are more susceptible to skin cancers because of a variety of factors. These include exposure to carcinogens over time (such as through sunburn or tanning booths) and immunosenescence, or a decline in immune function. Family history of skin cancers, multiple moles (more than 100), and pale skin also put a person at higher risk. The major risk factor for all types of skin cancer is sun exposure.

The ABCDE method can help people remember the warning signs of skin cancer:
A = Asymmetry (if a line is drawn down the middle of the lesion, the two sides do not match)
B = Border (the borders of the lesion tend to be irregular)
C = Color (a variety of colors is present; the lesion is not uniform in color)
D = Diameter (MM lesions are usually larger)
E = Evolving (note any changes in shape or size, or any bleeding)

Annual physical examinations should include inspection of the skin for lesions. Older adults should be taught to report any suspicious areas on their skin to the physician. Persons should particularly look for changes in shape, color, and whether a lesion is raised or bleeds.

Basal cell carcinoma (BCC) is the most common kind of skin cancer. It is often found on the head or face, or other areas exposed to the sun. Although there are different forms of BCC, the nodular type is most common, and appears as a raised, firm, papule that is pearly or shiny with a rolled edge. (Johnson & Taylor, 2012). Patients often complain that these lesions bleed and scab easily. When treated early, it is easily removed through surgery and is not life threatening, though it is often recurring.

Squamous cell carcinoma (SCC) also appears as lesion on areas of the body exposed to the sun, or from other trauma such as radiation. HPV is a risk factor of SCC, and metastasis is more common than with BCC. The lesions of SCC appear scaly, pink, and thicker than BCC. Their borders may be more irregular and the lesions may look more like an ulceration.

Malignant melanoma MM has a more distinctive appearance than other types of skin cancer. The areas appear asymmetric with irregular borders, a variety of colors (including black, purplish, and pink), and size greater than 6 mm. Malignant melanoma MM is often identified with the ABCDE method and MM accounts for the vast majority of deaths from skin cancer. The good news is that MM is almost always curable when found early. A skin check should be part of an older person’s yearly physical.

The best treatment for skin cancer in the elderly is prevention. All older persons, especially those with fair skin who are prone to sunburn, should wear sunblock and protective clothing. Most skin cancers, when treated early, have a good prognosis.

All skin lesions larger than 6 mm, or those with any of the ABCDE signs, should be referred for biopsy. There are many nonsurgical interventions. These include cryotherapy, radiotherapy (for superficial BCC or SCC), electrodessication and curettage, and topical treatments. Topical treatments are generally not as effective as more aggressive interventions, but research is ongoing in this area.

The prognosis for MM depends on the extent and staging of the tumor, but when caught very early, the cure rate is nearly 100%. Malignant melanoma MM presenting in older adults is often more advanced and aggressive. Malignant melanoma MM metastases sites are typically the lymph nodes, liver, lung, and brain (Johnson & Taylor, 2012). Surgical treatment is required in malignant melanoma, with chemotherapy and radiation. Adjuvant treatments for MM are also often used.

For more information on Skin Cancer, visit the American Cancer Society at:
http://www.cancer.org/cancer/skincancer-melanoma/detailedguide/